2020 Cerato GT
Joined Sep 21, 2019
·
759 Posts
First time here and first post as well. I've been slowly building up my sedan. However because it's a daily driver I don't want to go too nuts on it. The good thing is that it's pretty new so stuff available for it is relatively low.

Johrilla1017 said:
Hey, what's the part number for the eibach springs you used? I have the forte 5 GT looking to get it lowered. Thanks.
Click to expand...

This is from the box. Essentially it's for the 2017+ Hyundai Elantra sedan (AD series) or the 2019 Hyundai Veloster.

CyrustheV1ru5 said:
Your car looks AWESOME. I have a few questions:

Is your car an automatic? I see you installed a throttle controller and have been interested in installing one on mine.

What did you use to black out the red strip on the rear diffuser and the whole front grille? Also, I see you blacked out the area between the two taillights, did you use the same product here, too?

Did you replace the fog lights with LED's, and if so, do you remember the bulb you used?

Lastly, do you have the URL or part number you used for the smoked rear window visor?

Sorry for all the questions! I really like the mods you chose for your car, and would like to do a few of the same on mine! Thanks in advanced.
Click to expand...

Thanks for the kind words. I'll see if I can answer your questions.

1. Yes, the car is an automatic. Unfortunately we don't get the manual version (at least not yet) here in Australia.
2. Yes, I definitely recommend the throttle controller. I like the idea of being able to control the sensitivity in accordance to my driving mood at the time. I'm not sure what brands are available there, but in Australia I've installed the SAAS brand, which is cheap but performs flawlessly. It does it's job, letting you adjust the throttle sensitivity level on the fly.
3. For the red accents, I purchased a gloss black vinyl strip in 12mm. It covers the red stripe going across the back nicely (there will be some small gaps but it's not noticeable). As for the front, I was too lazy to remove the grilled and paint it, so I cut up small sections of the same vinyl stripe, and sat there and covered each red bit one by one. Took me about 2 hours, which in retrospect would have probably taken less time if I removed the bumper to remove the grille.
4. For the are between the taillights, I got a professional vinyl wrapper to do that bit as I don't have the skill (well, at least making it look neat). He used 3M gloss black vinyl as well and did it in about 15 minutes.
5. Yes for the LED on the foglights. The GT's the foglights use HB4/9006.
6. Here is the link where I bought the rear visor on eBay: 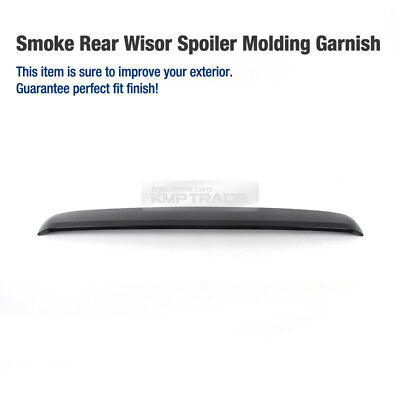 2019 : KIA Cerato K3. Color : Smoke Black. Specification : INCLUDED Double Side Tape for Once in Fasten at the back side. DOES NOT INCLUDED SCREW OR SILICON GLUE FOR INSTALLATION. Nice Exterior Upgrade.
www.ebay.com

Good luck! Feel free to ask anything else!

Saw that you said you changed out the turn signal bulbs. Just wondering what were the bulbs that you used on those and also how were they a pain?
I've been thinking of doing them because the stock bulbs look so cheap.

Also with your exhaust, do you have mufflers? (If you don't mind, a cheeky exhaust clip would be sick!)

The turn signal bulbs both front and rear use BAU15S or PY21W. I'll put a link for them below (I noticed you'rein Australia so I've put a local seller but anyone can buy them anywhere really). However you must be careful because a lot of sellers claim to be CANBUS compatible and error free but they're not. The link I've given you work without problem. The other issue is if you buy one that is too long, they will have trouble fitting in the back.

The front bulbs are very easy to access. Just 3 fasteners and you can pull back the cover to access them. The only problem would be the rear. These are extremely difficult to access due to the stock muffler tips. If you have an aftermarket muffler it makes it easier, but if you have the stock muffler, you may need to release it from the hanger to let them drop down in order to access the bulbs. Even then, they are in a tight area and it's difficult to twist them off and back on. It's do-able, just expect to swear and curse a lot.

I only did the axleback muffler upgrade. I tried delete the 2nd cat and upgrading the resonator, but found that even though the 2nd cat yields more performance gains, it's also quite noisy inside the cabin during acceleration. A lot of droning when you accelerate. And on the cold starts in the morning, it even scares the dog down the street. Very loud. So in the end I went back to the stock 2nd cat and resonator.

So muffler only = louder, deeper tone. Resonator delete = crackle and pop that a lot of people love. Cat delete = better performance but droning

2020 Cerato GT
Joined Sep 21, 2019
·
759 Posts
Lol. Don't follow me because I hardly update on this forum. But here are my latest convenience upgrades.
* Trunk tension springs *
The sedan has an auto open function but when the trunk does open, it only opens half way, and you still have to give it a nudge to open it fully. By installing a spring it now opens fully.

Video of the trunk now opening in full

2020 Cerato GT
Joined Sep 21, 2019
·
759 Posts
* Umbrella holder *
Found these holders that attach to the roof of the trunk that will hold the umbrella and shopping bags.

2020 Cerato GT
Joined Sep 21, 2019
·
759 Posts
As well as replacing the RaceChip with the JB4 piggyback tuning module, I also got an enclosed Takeda intake from aFe Power.

2020 Cerato GT
Joined Sep 21, 2019
·
759 Posts
* Sequential LED turn signal strip *
Added these to the front. They're nice at night, but not bright enough to be solo during the day so I've had to keep the factory turn signals. These double as DRLs but since the GT already has the clover LED DRL I couldn't be bothered to hook that portion up.

Lag said:
The car looks amazing. I am wondering how the ride is on the lowered springs? Also, did you encounter any rubbing when lowering it?
Click to expand...

The Eibach springs are quite good. Yes, it's a bit more bumpy, but it's cushioned and still quite tolerable. Less so now with the 20s, but if you've ever had a lowered car it's still decent, more than most setups. Besides, it's not that low really, only about a 1.25" lowering.
If the offset is good there should be no rubbing. There was no rubbing on the 19s with a +42mm offset, but the 20s only had a +40mm offset the rears rubbed. Had to shave it another +5mm to +45mm in the back. Still rubs occasionally but it's not noticeable.

Lag said:
Thank you for the detailed response. I have never lowered a car, so this would be my first time. I always heard that they can be harsh but I assume that's due to the spring itself. I was planning on sticking with the stock 18" for a bit, so it sounds like I shouldn't encounter any rubbing.
Click to expand...

Should be fine if you stuck with the stock wheels. They are a cool +55mm offset so plenty of clearance. Do you guys get the Michelin PS4 over there for tires? I found those to be quite harsh combined with the stock springs (in Australia it's tuned for performance so it's quite stiff). So when I swapped to Eibachs and Continental tires it was a more comfortable ride.


AnthonyW said:
I also noticed that the part around the front grill (the silver part normally) is also blacked out, just wanted to ask if that was also wrapped? Either way, are you able to provide me some details on where you got it wrapped?
Click to expand...

Yeah, that's wrapped as it's too time consuming to remove the front bumper in order to remove the grill for painting. I can recommend one of two places, depending on where in Sydney you are. Are you in the east or out west?

Lag said:
The Michelin PS4 were an option where I bought mine. I stayed with all season tires, which are some Kuhmos. I have noticed the ride is a little bumpy, more bumpy then I thought. I was planning on swapping to some continentals summer tires after next winter. I have heard good things about them.
Click to expand...

A lot of people are complaining about the stiff ride. The thing is, I found the ride after installing the Eibachs to be more comfortable than stock. I probably attribute this to the shorter bump stops that came with the Eibachs.
I reckon if you were to cut your bump stops so it allows for more wheel travel, it should make the ride more comfortable.

Konig Wolf53 said:
Loving the look of the ride. I stumbled upon this thread while looking for mods for my car. We seem to have a lot in common.

I also like the idea of wrapping the rear center reflector bar in black.
Click to expand...

Looks good! Nice and clean. I'm jealous that I can't fit that duck tail spoiler that extends out a bit.

Konig Wolf53 said:
My spoiler? From the pictures, it looks like we have the same one.

Also, where did you get those springs for the trunk. It's quite annoying that it only opens up half way from the release.
Click to expand...

Ahh, it appeared like you have the one that extends out a bit. I couldn't get that to fit on my GT because the holes left behind by the factory lip spoiler.

As for the trunk spring, I found this to be the best fitting 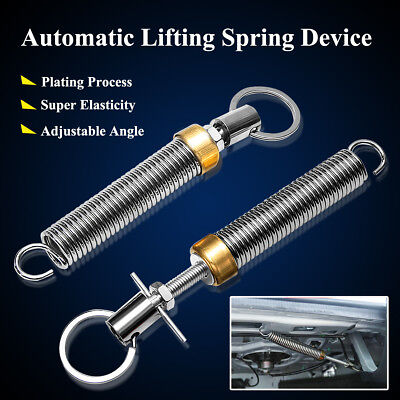 Konig Wolf53 said:
So I'm curious about your throttle response controller. Did your car not come with the 3 driving profiles that you can switch through from the factory? Eco, normal, and performance? Was the SAAS throttle control installed to replace that?
Click to expand...

Naw, a throttle controller helps to enhance the experience. It makes the pedal more sensitive to the press, which gives the illusion of more power, and thus more fun. Plus it helps with the dead spots despite being in Sports mode.

2020 Cerato GT
Joined Sep 21, 2019
·
759 Posts
The Avant Garde wheels didn't work out due to the low offset (+40mm offset with 8.5" wheels will not fit a lowered Forte). I ended up getting another set of 20x8.5 wheels with +45mm offset. The V8 V-14 wheels in matt black. They are ok. The wheels I still want are not available.
1 - 20 of 172 Posts
Join the discussion
Continue with Facebook
Continue with Google
or sign up with email
About this Discussion
356 Replies
49 Participants
Last post:
Spotman 3 d ago
Kia Forte Forum
Forte Forums are where you can talk about the latest Kia sedans including the Kia Forte5 and Kia Forte Koup.
Full Forum Listing
Explore Our Forums
Koup General Discussion Performance Modifications Koup Body Kits and Appearance Sedan General Discussion New Member Introductions
Recommended Communities